Q is for QUITTER!

Lord, what have I not quit. I am a quitter of all things large and small.

First thing I remember is I quit baseball. I was a helluva a catcher, but I didn't have that sling-arm you need to burn out the stealer heading for 2nd base. I could hit, I could run, I could score and I could for damned sure catch, but that weak-ass side-arm throw of mine got me.

Plus, my coach and my old man went to high school together, and I'm pretty sure Pop nailed the dude's old lady and showed him up because Pop's got a third forearm.

So coach flattened my ass against the pine until I quit. I was twelve. Man, I loved baseball, too, long as I could catch.

I quit Extemporaneous Speaking, which is Gulf Coast slang for Debate Club. Not sure why I quit or why this matters, but it stuck with me. I got bored, I suppose.

I quit drumming when I got to college. And let me pause here and explain something about the drumming...

I am a tapper. I am not the every-day tapper who tap-taps and fidgets. I drum. I make rhythm. I always have, still do, and I even type to a rhythm. I clack my teeth because in high school the teachers started throwing erasers at me trying to make me stop tapping.

That's true as a lady's leg hair. They threw chalk and erasers and one even cracked my pen.

In third grade, I BEGGED my mom to let me take drum lessons. I gave up my recess and started drumming. Damn, I was good. I don't mean good, I mean creepy good. I quit, though, because my friends were playing outside.

But God had other plans. He does that sometimes. We moved when I was in seventh grade. I hadn't drummed since third grade, though I had tapped, tapped tapped tapped tapped, always tapping, always drumming, just not formally to formal music.

I tried out for band again. I asked the other drummers what the notes meant because our band director was too busy molesting the high school girls.

After a few weeks -- a FEW WEEKS -- we tested for chairs and I yoinked first chair!

I went to district every year after that, and once got to regional. I didn't make it past regional, though, because I played the bells all natural. I had no fucking clue what those # and sharp signs and those other goofy symbols over the notes meant, and kept wondering why there was this extra row of keys above the main rows (these are the black keys on a piano, flats and sharps).

One of the drummers at regional asked me: What the hell were you playing?

I said, The music sheet.

He shook his black face and white eyes at me and said, Nah ah. You played something else.

Still, I made region, and so did he, and when that black dude walked in with a pair of drumsticks and saw all those Vidor jackets on the back row -- and Vidor, Texas, at the time and maybe today had a sign that read, Nigger, don't let the sun go down on your head (leg hair) -- he saw me (not from Vidor) and stuck to me like I was his favorite uncle.

Anyway, to say I was infatuated with drumming is like saying guys on occasion think of vagina.

Pop, God love him, bought me a five-piece Pearl drum set not two months after he moved out. I still have it.

Anyway, I got to college and quit drumming. I knew -- I KNEW -- if I got into drumming there in Austin, music capital of the south, I would have flunked out of college.

So I quit. Cold turkey. Drum lessons in high school, the ones I paid for with my own money, gone. Quit quit quit. I still hear only a lead drummer and backup singers in every song, and I quit.

Of all things, I miss drumming the most. Still, in college, I carried around a drum key, and showed it to every woman I met and asked: What is this? 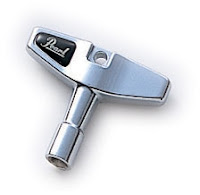 I swore I'd marry the first woman who knew what it was. Only one knew, and I think she cheated even though I also think she loved me, but like so many things I fucked it up and who knows where she is now. Happy without me, I suppose.

When I write, when I have sex, when I drum and when I hold my breath for a really long time and finally breathe in, that's when I am with God. There will be a trap set in heaven for me, mark those words, and I'll keep all you knuckers up all night long banging out licks and riffs and flams and paradiddles and sixlets and so forth.

You should have seen my forearms, and not from what you think a teenage boy might be doing to get ripped like that.

I won't go into the same detail, but I had the same passion for medical school. I graduated valedic of my high school class, and went to UT Austin, majoring in Chemical Engineering, for no other reason than everyone said it was the toughest course on campus, and I said, Bring it, and I quit drumming to be a doctor.

You grok that last part, I hope...

See, I quit homework. It's bullshit. It always has been. I looked at the class curve and it said, Homework: 10% of your grade.

End point is I didn't get into med school on grades. I scored high in the MCAT -- Medical College Admissions Test -- but who the fuck needs another white-boy, English-speaking doctor?

I tried for five more years to get into med school, and finally took the DAT -- Dental Admissions Test -- out of desperation. I scored in the 99.4th percentile.

Damn, huh. Surprised me too! I figured I would be a shoe-in.

Guess not. I'm an engineer, not a dentist, and I only got one interview.

So I quit. I gave it up and pursued other avenues that were, and have been, more lucrative.

I quit my first marriage.

I quit karate, which I was good at, and it's the only sport I consistently brought home first-place trophies.

I quit all these things I'm good at, but still I continued to write. I continued to drink. I continued to work out, to try things I knew wouldn't work, and to invest in myself above all other things. I'm a successful engineer, a great drinker, I have an AWESOME Wife 2.0, and I'm a published author with a small local press.

I'm a quitter, I suppose. But sometimes you have to quit in order to move on. Some dreams need to be dumped so that others my live.

Here's to dead dreams and the quitted lives we aren't living.

I didn't quit your post; I found it most interesting.

Well, I quit every job I ever had except one that i got fired from. I'm sure I could equal the size of your list easily enough if I set my mind to it. Maybe I will. I like what you've done here.

In high school, I quit sports for music. In college, I quit music for drinking. In adulthood, I quit drinking for working. I haven't quit working, yet. I've quit every job I've had until my current employer. I quit Kung Fu and kickboxing, smoking and my first major (political science is BORING). I quit every idiot boyfriend who wouldn't put me first, and discovered I needed to put me first.

Eventually, I returned to music and am part of a working band (we should jam sometime).

Love that you used the word helluva. So cool. Did I quit your post? No. Did I skim...yes. My four kiddos are running around the house. It's spring break here. Can I quit that????

I don't quit. To my own detriment I don't quit. I have found that those with the most talent lack the drive of those of us with less. Gods sense of humor I suppose. Damn, this was funny. And when you do start your rock band...PLEASE let me sing backup. ♫do whop...do whop...♫

Drummers are my favorite band members.

I don't suppose anyone has ever mentioned the the term ADHD and Eric in the same sentence . .

You've had a whole lot of fabulous experiences Eric. Be proud of all the things you've quit. Most people do nothing more than think about all the things they want to do instead of trying them. So what if it doesn't work out - at least you know.

Hmm, perhaps one of your posts will have a demo of your drumming phase :) That would be cool.

Now I know we're siblings. :) I have so many certificates I lost count. Real estate agent, stock broker, CPA, QME, blahdy, blah. Yep. Cold turkey. Still have my DC license, though. And my drivers license. Haven't quit either of those. And I never intend giving up the second till I can't see to drive. Maybe not even then. There's plenty of those suckers out there now, as I type, putting fear in to the hearts of other drivers.

Loved this post, ~ that rebel, Olivia
P.S. Ever thought of starting a drumming circle? I've often thought of joining one. I'd love a nice set of bongoes between my legs.