Do That Which You Fear the Most

So I'm walking home from dropping off my son this morning. His mom works at an in-home daycare in the neighborhood, and I work from home, and on kind-weathered mornings I put him into the backpack (he's a little over 18mos) and haul him down there on foot.


And I'm walking back thinking about fear.
I think about fear from time to time, because it is one of the greatest measures of a man. (I mean human and include women, don't get your panties in a knot. Geez. Is it that time of the month already? People are so easily offended these days which is way more fun, isn't it!)

You can tell a human's (better?) demeanor by how they react to fear.

Some run and hide. These we call either cowards or survivors depending on whether you are looking out of or into the hiding den.

Some charge at their fears like dumb salmon up the stream into that goddamned bear's mouth. All that work to get your fat ripped out by some grizzly cub. Nice one, karma, very nice, but the next joke's on you, ya bitch.

These second types we call either fools or, well, something else. Usually we call them fools.

See how they failed? we say. See! See what happens when you swim upstream, ya dumb fish! See!

Well, not all of us say that. Some of us stand back and call them heroes. We mourn their passing and admire their bravado. We swim with them next time and face our fears, knowing full well we could at anytime be chomped, flayed, spread on the bank and our heart swallowed beating.

Me? I admire these guys. Sure, I fail. I have lots of failures to report. Heck, I'm in the oil field. I quit my job in semiconductors in 2013 to get into the oil field. Do the math, folks. It's not good math. I missed med-school by half a point of GPA. I'm divorced. I'm short and have small hands. So yeah, I've failed.

I also made it upstream a few times. Missing med school, I created a great career in semiconductors. I remarried a beautiful woman and had two children with her. I published a few novels and shorts, two from a decent publisher, even. I earned respect as an author from friends, family, and enough strangers to measure on both hands and half of one foot. I created a business and established myself in a niche market as a genuine player, albeit a very quiet player as oil prices refuse to rise up (stupid bears!).


The point is this: Do that which you fear the most.
If you fear heights, climb up there and look down. Afraid to try something new for fear of failure, ridicule, mockery or debauchery? Do it anyway. Try it. Fail. Fail often. Fail happy or die dreaming.

Chase out your fears and leave them on the bank with the other dead fish. Swim hard. Slap those bear-cheeks with your fins, and don't forget your teeth. Fight hard, die hard, live hard.

Anyway. Jump in and swim.

How about you? Are you afraid to swim through the bear's mouth? At least I made you a salmon and not a chicken. 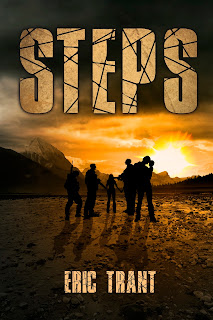 I'm glad you're back, Eric.

The only way to get over a fear is to do it. (Wisely, of course.)

Is Steps your new book?

Yessum. It came out earlier this summer but like yourself, it has been a whirlwind. I have an 18mo baby, too, and that takes a ton of time.

So glad you're back.

As for bears, I'm not afraid of them. Bring 'em on. You can't live half-assed in this world anymore. If you don't at least TRY" to realize your dreams you end up at the end of your life with regrets. And that makes you the biggest loser.

I say, go for it. No matter what it is. Blue shirt and pink pants. Why not? historical novels or slip stream? Why not? Earl Grey tea instead of espresso. A new taste sensation. You'll never know until you try.

Avoid wearing certain hair in some styles.Wearing a ponytail can lead to hair loss. Other tightly worn styles such as braids and cornrows are also known to cause you to lose your hair.
satta king