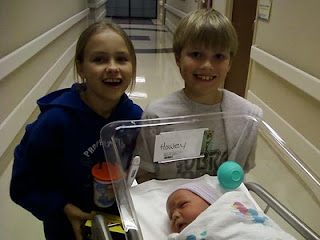 First: Thank you all for the well-wishes! We had our baby boy November 17, and mom and baby are and have been nothing but perfect all year, and they are continuing this trend moving into Christmas. I also have managed to write 19kw this month -- not too shabby! -- and am determined to finish my WIP by January.

In the picture are my daughter, son, and son. It's the right baby and his name is Trant, despite the Howey on the baby-tub. That's his momma's last name, which will be changed in 2011.

What the heck do I mean by writing forward?

Hell, it's what NaNoWriMo is all about, isn't it. Don't stop to rewrite. Don't pause or stall or drown your muse in an endless edit-reedit-rereedit-rerereedit cycle.

Write ~FORWARD~! Onward, ho! Move along. If your train derails and you find yourself writing in the desert, on a horse, with no name, write from the desert on your nameless horse and forget the train derailing, because that may be the most wonderful thing you ever write.

Now why did I get to thinking on this topic? I'll tell you why, thanks for asking.

For instance, I'm reading Heinlein's Stranger in a Strange Land. He wrote that book forward. I guaran-damned-tee you he didn't stop to edit along the way. Even his character-author Jubal Harshaw said this about his writing, which he dictated to his secretary (and I paraphrase): For God's sake, Anne, don't show it to me! Type it up and mail it off! It's hardly worth reading, much less writing, and if I read it, I'll destroy it. Now off with you! FRONT!

You see what he's saying, don't you? That's Heinlein giving you one of his methods. He wrote, refused to re-write, and in Stranger I hit any number of plot-kinks (if there ever was a plot) that would have stalled me, had I been writing the book. I probably would have put it down and burned it around page 150.

But Heinlein didn't stop. He didn't burn it, and there's a good chance he didn't do much editing before he submitted the piece. Hell, his first release required a 60kw cut!

And it's considered one of the greatest Sci-Fi pieces of all time.

Anyway, we call these people pantsers in this blogosphere. It's what NaNo is all about, writing forward not backward, move along, keep it up and keep moving and get from here to the end.

It's the way we dream. We don't stop and edit our dreams as we go. We dream through to the end. We live life the same way, no do-overs.

In some ways, I believe the computer and the word processor are the WORST thing to happen to writing. It makes editing too easy. Used to be you wrote it with your quill, or in later years typed it.

You wrote forward. That's the way it's always been. WRITE FORWARD!

I say this about editing, and you can quote me on this: Revision can take a good rough draft, pound out the lumps, roll the kinks smooth, straighten the curves, round the edges, and untangle all the thoughtless knots—until there's nothing left but a bunch of flat, balmy words. Blech!

Keep some of the kinks. Let us see the author in you, the writer, the YOU in your words! Write it forward and let the editor sort it out, should it come to that.

It's how I write my blog posts, and when I finally get going on a freaking novel, it's how I write my novels. When I forget this, and begin editing, I kill the piece, just like Jubal Harshaw aka Heinlein said I would.

Assuming that works for you. It's funny how authors give conflicting advice. Who was it who said, All first drafts are shit! (Hemingway) 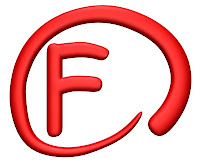 As expected, I am failing NaNo.

Someone, please, ask me if I give a shit. Please ask.

There you are, thanks for asking. No, I don't give a shit.

And before anyone goes to bragging, my publisher was at 60k words on day 5. So shut yo mouf.

Where's that gal who asked me that question a second ago. There you are. You're a cutie, by the way, thanks for asking, and no, I still don't give a shit.

I put more thought into my story and dove into it, hard.

I also am getting back to my ~method~.

I have to think on what I write, before I write it, for about an hour. At least an hour. I ponderize the scene until it's ripe and then I sit down and bang it out!

I used to use my drive into work to do this. I have a 45min to 1hr drive. Turn off the radio, turn on the ponderizer, and for an hour or two peck it out when I get to work.

I got back to that method and it feels wonderful! I write more at home (I use a pre-sleep method to think on my story for morning sessions). I worked in some writing time at my job (that's not an easy thing to do, you know).

And I gave myself permission to skip a little -- not much, but a little -- on the workout routine, in order to catch a few more scenes before they vape on me.

Oh, and my baby is due any day now! Doc said she'd be surprised if my wife makes it through this weekend with that little baby still in her belly.

More on that later...

GLUCK on NaNo. I would say I'll get to your blogs soon, but that's optimistic at best. I will say this: I'll try.

And WHY ARE YOU READING THIS POST WHEN YOU SHOULD BE WRITING! 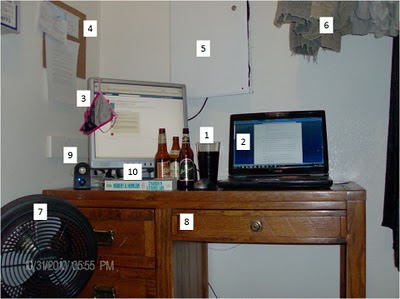 All right you knuckers, you asked for it. Here's my writing area for Summer's Lazy Fest.

I took a picture with me in it but I cut that one because I look fat and I am NOT fat, dammit.

If you read the numbers, here are what they mean.

1) Smithwick's + Guinness = (what)? Bonus if you know the proper terms for this mix. For inspiration. This is inarguably the most important thing in writing, thus the #1 in my list.

2) Current WIP. Ongoing, soon to be deleted and completely re-written, again, as is my modis operandi.

3) Wife's skivvies, for inspiration, enhanced by the effects of #1. Lots of inspiration in those things, often more than I can handle.

4) Bills I hope to pay when I hit the BS (best-seller's) list. Total of about $4k, which is far more than most writers make.

5) Cable box. Because this is the closet, and they put cable boxes in the closet.

6) Shorts. I hang my shorts. Don't ask. My wife started that crap.

7) Fan, because the closet gets hot.

8) Desk I hate. I will eventually destroy it with a 3lb sledge and burn it down to the nails.

9) Speakers, blasting She Fucking HATES ME! by Puddle of Mudd, which is my theme song.

10) Current read, Heinlein's Stranger in a Strange Land, because my WIP is a Sci-Fi and I read only the best during my writing-slash-drinking binges.

Now you have the 10 variables for the genius equation. Don't abuse them, or if you do, at least give proper credit to Eric W. Trant at Digging with the Worms...

What do you use for inspiration? Does Guinness inspire you? Have you ever had Shiner Bock? Why is beer known as The Great Motivator? Can I see your (or your wife's) skivvies?
Posted by Eric W. Trant at 4:00 AM 26 comments: