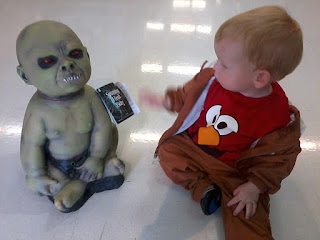 (That's my son on the right, in the picture, shopping for Halloween costumes.)

I'm not sure why I got the hankering, but in early September the worms started digging and what they dug up was this: A bunch of little bones.

Early September, mind you. I suppose it's the thought of winter that brings in those thoughts. God, I wish it were winter already. I'm sick of the heat, and we need some rain in Dallas. (God, if you read this blog, SEND RAIN!)

Anyway. The worms dug up the muck and I started a new novel, one that had been incubating for about nine years, and it sho-nuff has some dead children in it.

It's full of death and suffering. Not in a depressing way (I hope), but in a realistic and heartfelt way.

Now, onto the Life Imitating Art subject, or Larf, as I'll call it. That's Larf, you'll all say one day, Larf's a bitch, Get a Larf, meaning Life + Art.

I will, of course, receive no credit for coining this term. And Larf goes on.

So my dad died last week. Don't worry, he didn't ~stay~ dead, but he was dead as your granny's virginity for about two minutes.

Some big black guy, I didn't see him, broke my father's chest pumping blood manually with his heart. Pop's heart stopped after he had some stents put in. He was in the ICU already, otherwise he'd be in a nice box today, wondering why the hell his lips were sewn up to his gums.

(Pop is alive and well. They got his heart beating and it's beating still. Sorry if I confused anyone!)

Larf, eh. I'd been writing about death for about a month, thinking about it, and then it glove-slaps me in the face and touts me.

I'll share with you someone else's Larf, which is here, which is beautiful:

I read this and like so many of Annie's ad hoc poems, it scraped my neck just at the base of my skull, there in the primal parts we share with birds and lizards and cavemen alike. True words, she wrote, true and old as granny's virginity.

Why do I think that last part is so damned funny?

I'll also share something I wrote in my current piece. It's a POV I tried out in a couple of scenes, see if it fits. It's second-person present tense. It seemed appropriate.

I wrote this about a week before all the death (both permanent and temporary) around me.

Nothing prepares you for the loss of your child.

When you get pregnant, out come the doctors and nurses and Lamaze specialists. They show you how to change diapers, how to nurse, how to push and breathe during labor. They tell you what the baby should eat and warn you against the toxicity of eggs and honey and bovine milk, seemingly benign things unless you stuff them into your little baby.

There are stores dedicated to clothing your baby. Entire sections of the local grocery are filled with baby necessities, fluids for when they are sick, bibs for when they drool, plastic seats for when they ride in your car. Friends and neighbors pour into your yard when you release blue or pink balloons into the sky and announce your baby's gender. People clap and cry and cheer your baby's arrival.

It is different, though, when you lose your baby. People grow hushed and cover their mouth and turn away. Sure, they send food for a few days, but after that gesture, afterwards, after the afterlife where there is no life after, after you find the baby stiff in the crib for no good Goddamned reason, after you find him nose-down in the kiddy pool in a few inches of water, after you find her behind the couch with a marble in her throat, after you find him on the dining room floor with a bullet in his head. After the friends and neighbors and family send food and maybe attend the funeral, if there is one, because sometimes, if the baby dies in the womb, they don't even do that.

All the stuff in-between those two phrases is a garbled mess of nods and hand-waving.

There are no classes about how you breathe. There are no doctors or nurses who rush to your side to guide you. There are no shelves in the store dedicated to burial clothes. Hell, there aren't even greeting cards, maybe one that reads, "So sorry you lost your toddler down Old Man Johnston's well. Better luck next time!"

You are ostracized and condemned and moved to the other side, wherever the hell that is, probably near hell because that's how it feels. You are one of them, one of the others, one of those who lost their kid, so tragic, and have you heard about, and I can't imagine.

God gives you no reprieve. He allowed His son to be mutilated and killed and so great is God's love that He gave His only son so that you may be saved. Your son died for no greater purpose. He died for no reason at all, and yet you are charged to bear God's deepest grief.

You are not God. No one worships your dead son, and let's not forget God didn't handle the grieving all that well Himself. After three days He couldn't take it anymore, and He raised His son back to life.

Anyway. Larf it up Fuzzball, Larf all you want, Larf with me not at me.

I have a wire crossed somewhere, you know. I tend to laugh when I should cry. There's a picture of me in the ER with a bone sticking up from my shoulder (not quite poking through the skin, but almost), and I'm smiling like I just won a six-pack of Shiner 102 beer.

I have a hard time crying, see. All I can think is Larf Larf Larf when it all goes to shit.

Have you ever had a Larf moment, where something you wrote came to pass? Do you look back on your old words with new experience and think, Dang, that was spot-on? (or Dang, what an idiot I was!) Did the second-person present tense work?

PS. My first wife miscarried our second attempt, about two months in, after we had already told everyone and scheduled a sonogram and named her Hannah. I had to flush my burger-meat daughter down the shitter, because that's where she came out. I didn't laugh at all that night, and I don't laugh now thinking on it. I dredge up that pain when I write, and God help me if it had happened when she was 7 years and not 7 weeks. In all seriousness, heartfelt prayers for anyone who's lost a child of any age, be it in the womb or out.
Posted by Eric W. Trant at 8:54 AM 7 comments:

Orphans: Why do we love them?

So I'm writing a novel with my kids. We're in the fun phase -- drafting characters and brainstorming ideas.

I call them idears, and we keep them in a black book I call My Little Ocean. The Ocean used to be pocket-sized. Now it's a leather-bound journal.

Anyway, we're drafting the characters, and I keep coming back to orphanizing the two kids.

See, you need two kids, a boy and a girl, same as I have at the house. I'm not making them twins. The girl is older by a year.

And I keep killing off their parents. Sometimes one or the other parent is alive, but usually the kids are somehow abandoned.

And I got to thinking how common that is.

I could go on, but you get the point so go on your own dang self. The thing is, we orphanize our children in YA lit.

Why is that, I wonder?

I still don't have the answer, but I'm beginning to let that question fester. I look back at my own stories and realize I have a novella about orphans. Never thought about it.

There's something romantic about an orphan, something magical, something that gets the gears turning and makes us automatically relate to them.

Why do we relate to kids without parents? Why is it so easy to demonize step-parents and victimize step-children? I have no freaking clue. You tell me.

But we do relate. Maybe it's that coming-of-age thing, where we all sever from our parents and become ourselves.

Oh, Spider-Man was orphaned, too. So was Batman, and in fact his orphanization caused him to morph into the Dark Knight.

Gads, that's an easy thing to think up orphaned heroes, isn't it.

You tell ME! Why are orphans so common and desirable in literature!

Meanwhile, I'll be drafting my own set of orphans. They have [expletive] eyes. Shh. Don't tell anyone.