Politics and your image 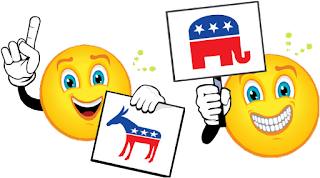 Here is the question: Should you post political thoughts on your blog?

What about in your writing? Your poems? Your songs?

Should your paintings or drawings or photographs be politically motivated?

The answer is simple: Only if you mean to.

If you insert your beliefs into your writing, do so with panache and subtlety and a great deal of intentional intent.

As an example, in the movie Blind Side, the character played by Tim McGraw makes this remark, after meeting the ultra-liberal Kathy Bates: "Who would've thought we'd have a black son before we knew a Democrat?"

You might believe I am against bands who are anti-establishment, but there is one key rule they all follow: They are politically neutral in that they hate or love the country, not the people in it.

They do not force their audience to choose sides!

Green Day and Marylin Manson, for example, hate the system. Toby Keith sings songs about patriotism and the American way.

They express opposing beliefs without forcing the audience to choose sides.

They do not attack individuals, or specific groups such as Democrats or Republicans, Liberals or Conservatives.

You as the author (or artist) should always be on the same side as your reader. The person reading your blog, listening to your song, inspecting your artwork, watching your movie, has signed a silent contract that states you will not attack them.

As an example of how ~not~ to express your political beliefs, I give you The Dixie Chicks and their attack on Bush. When they singled out Bush, they alienated their conservative fan base.

It only takes one post, one line, one concert, to ruin your career.

Be careful during this election year. The blood will boil. Resist the temptation to blog on politics, and certainly don't force your audience to choose between you and their beliefs. That's why we have Political Pundits (PP).

How about you? Are there political biases in your writing/artwork? Should authors/artists avoid becoming too politically polarized? Do you have more good or bad examples?

I think there are sometimes political themes underlying my writing, because it's hard to avoid, but I keep it subtle, and don't hit the reader over the head with it.

When it comes to blogging, I never blog about politics, or religion. It's just too easy to alienate people you might have been able to connect with on other things.

I find that general disdain and sarcasm keep me pretty safe. ;)

Like Matthew, I'm sure my general conservative values come through, but certainly not my political views. Nor would I ever discuss that on my blog.

The only thing I don't discuss with my mother is sex because that's just...ewwww.

I think like you said, if it's subtle and coming from the "character's" POV, then it's not necessarily "you" saying it.

But you're right, in this firestorm of a political year, one must be very careful what they say.

SHEESH. Politics and religion. Could there be any two more divisive subjects? And yet, if we write for an audience...aren't we just a sham. Love me. Leave me. My beliefs are mine. I read a lot of bloggers who's politics or beliefs do not align with mine. But damn the writing is good!

I have a natural cynicism for anyone who wants to spends millions, no matter the party, for a job that pays thousands.

In my novels, I try to put characters representing both sides of a spectrum and then let the reader decide.

In FRENCH QUARTER NOCTURNE, I have two best friends : one an agnostic, the other a reflective priest. Each try to be considerate of the other's belieifs, looking at the heart of their friend. Great post, Roland

I do post about religion on my smaller blog, but rather about my Faith, about it's influence on my life etc. I make a point of not exerting pressure on people to follow my faith or my way of thinking.

As for politics etc... I try to stay out of it.

Well said Eric. I write about social issues, and the injustice of "the system" but I don't think that counts as political. My characters haave a wide range of views and coping mechanisms.

The same with religion. I don't explore the topic, but I do show how it relates personally to each character. I don't feel there is a reason to avoid these subjects in the content of my stoties, but they are not the focus.

I use the same philosophy on my blog, and in commenting on other blogs. I'm not politically or religiously motivated, so it makes it easy to avoid outright discussions, except on specific policies.

I didn't even join in the SOP thing that everyone was posting on their blogs. Nothing wrong with asserting your support or disapproval on an issue though.

People can talk about anything they want... but some people won't like it. I don't like political discussions-and some get off on it.