I am CAPTAIN OBLIVIOUS! 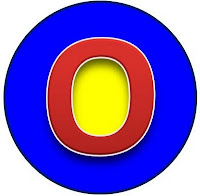 I am Captain Oblivious. I was last night reminded of this when I dreamed a little dream.

My dream-wife, nothing at all like my life-wife other than they looked the same and shared a name, said to me, I've been seeing other people.

Other people? said Dream-Eric. You mean like, more than one?

She then began naming Asian guys, because apparently dream-wife had a thing for Phongs and Wongs, and I stopped her after the fifth Tang and pointed and said, Get out.

She left, and Dream-Eric got plowed and fast-forwarded through a few dream-days, with dream-wife texting these coded messages that had to be read in the mirror upside-down, numbers only, things like 07734 (hello) and I love you and whatnot.

I woke next to life-wife and didn't wake her because she was tired and had gotten up earlier with the baby, who for some reason had been great all day and wanted to cry last night. I blame the Tex-Mex for that dream.

I was reminded of that big red O with a yellow middle against a royal-blue back painted squarely on my chest. I am Captain Oblivious.

She could cheat and I would never know. She wouldn't, of course. I believe that in my heart, and I'm not worried about it. Like I said, blame the Tex Mex because I ain't the jealous type. We're good and it was just a dream, but it was one of those vision-vivid dreams that really shake you, if you get me.

I've been cheated twice -- that I know of -- and both times I stared shocked as if suddenly realizing that cup I'd been guzzling was full of bugs, a minor detail that in my greed I had overlooked.

I even argued with a doctor once, my freshman year in college. Let me relate this story.

I'm not sure what it is, I said. They just showed up one day.

I dropped my drawers and showed her the damage. Looked like zits all along my crotch.

Doc said, You have mollusca.

What the hell is that? I said.

It's an STD. Very common and curable. Kids sometime get them on the playground because they're so contagious.

How the hell did I get an STD? I've been with my girlfriend since high school. I'm a college freshman, she's a college junior, that's like five years, and she's the only one I've had sex with. How can I get an STD?

I said, I haven't had sex with anyone else. Could it have been from the showers? I live in the dorm.

No, the doc said. You get it from having sex. This was transmitted sexually.

But I haven't had sex with anyone but my girlfriend, ever. How could I get an STD?

Thinking back, I'm pretty sure she was trying not to laugh at that big fucking O on my chest, as Captain Oblivious beat his arms and flew off the nearest rooftop into oncoming traffic covered in flaming rags while gagging on a piece of overcooked pork chop.

I am Captain Oblivious.

Have you ever been Captain O? Have you ever suffered Tex-Mex reflux-driven hallucinations late at night so disturbing that when you got up to urinate, you were forced to sit down because your hands were shaking?

Yeah. Both. Naive, gullible, oblivious. I've got crappy raidar for everything. And the dream thing...well...my dreams are almost always nightmares. Vivid. Dolby. Surround Sound. 3D. If only I could sell tickets, I'd be set.

Nightmares are so terrible because during them, they are real to you. As for being Captain Oblivious, we all are at one point.

It's called denial. And it isn't just a river in Egypt. It is the way we deal with truths to painful to consider. Stay away from the Tex-Mex for awhile, all right? Have better dreams tonight. Roland

Sadly, I am always forced to sit down when I urinate (shaking hands or not). I do envy you boys that luxury.

Can't say I've been cheated on, not in any serious relationship, so I've never found myself as Captain Oblivious. Unless I never knew it. Then, in that case, I'm still Captain O.

Ignorance does have its blessings.

I've been oblivious EVERY SINGLE TIME in the cheating arena. I guess I'm either blind, or stupid. Which is why I don't date anymore.

LOL; I almost hate vivid dreams more than ones I don't remember, but leave a bad feeling.

I'm sure there's a story idea percolating in the back of your mind. Either that, or you characters are hunting for another writer . .

I don't know whether to laugh or cry. I've had those extremely vivid, extremely WRONG dreams before. When I first started dating my husband, I had a dream that his best friend had convinced him I had cheated on him with a morbidly obese and hairy man (gag)--and he believed his friend! I woke up so pissed. Lol.

I think we all are at one time or another. Sometimes we just get wrapped up in life that we forget to look around.

I've had dreams before that were so real and I was soooooooooooo pissed at my husband that even when I woke, I couldn't shake the anger and I was mad at him all day for something completely out of his control. Sorry, honey!

LOL! This dream is a lot like your floating blue God head story. Wasn't there a naked angel in that one?

I thought MY dreams were weird.
Edge of Your Seat Romance

I'm a weird combo of incredibly intuitive and perceptive, and then completely, stupidly oblivious. I mean, it's nothing in the middle, I'm just one or the other, and since I'm more often intuitive, when I miss the HUGE FLASHING NEON SIGN I am sort of just flattened because it would never occur to me that sometimes I just miss huge stuff.

I have bad dreams all the time, and honestly, I can't blame the food anymore. I blame my brain.

Everyone has the occasional nightmare, Eric. In your case, it probably was the Tex-Mex. Next time, have homemade.

When I have a nightmare I have to get up and turn on all the lights. Then I sit on the toilet lid and wait for the shaking to go down. Talking about it definitely helps though. Makes me realise how silly it all is.

Being oblivious sucks sometimes. I had no clue with my first husband. You don't know whether to feel really stupid for being so trusting or realize it's THEIR problem and move on. It can be difficult and the truth is, you just never REALLY know. All you can do is decide what kind of person YOU want to be. Best of luck with your wife. I hope all really is well.

My, my. That's a powerful dream that wakes you up quaking! I especially liked the coded messages upside-down in the mirror. :)

You asking ME? Have I ever been a Captain O? Why certainly, my dear Eric, I have.