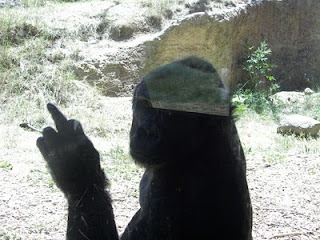 If you don't believe supporting roles are key to great stories, let me ask you something:

What is Star Wars without Vader?

What is Pirates of the Caribbean without Jack Sparrow?

Would Dorothy be so interesting if not for her companions?

How about Mr. Potter? The most interesting character isn't Potter or even his friends -- it's that big dude who befriends spiders and unicorns, Hagrid.

What about Lord of the Rings, you ask? It would hardly be LOTR if not for Gandolf and Gollum.

You get what I'm saying, don't you? Every story has one character -- and often multiple characters -- who pull the story along. These characters are the interesting ones, the memorable characters who draw us into the story and keep us reading along.

Here's the ruse, though: Often they are ~supporting roles~!

The Main Character (MC) has to worry about the plot, the conflict, the one-two-three of the chapterizing, manage the wordcount, and drive from beginning to end. This can be agonizing, boring, painful, not to mention rote. Your MC is all business and no play.

So in stomp these supporting players to tear up the stage. They tickle the plot and move it forward, but really, most of them can be removed or replaced or edited down to minor bits. It's only the MC who is irreplaceable. If that's not true, you have the wrong MC!

For instance, let's look at Gollum in LOTR. He serves the MC as a guide, a foil, and an antagonist, and serves the author to enhances the backstory. None of these things were ~necessary~ to the plot. Frodo could have found his own trail into Mordor and never met Gollum. Heck, he didn't even need his good buddy Sam to tag along, did he?

But the trip itself was awfully boring. One-two-three. Describe the mountains. Four-five-six. Kill a spider. Seven-eight-nine. Burn a ring, ten you're done, let's go home.

Instead of moving linearly, though, JRRT introduces Gollum, a sidebar character who is, above all things, interesting and memorable. The story, if not the plot, just got better.

I could go on, but I think you get the picture. Along with your MC -- who should be interesting in their own rite, but may not be the ~most~ interesting character in the book -- you need to include sidebar characters who not only enhance the plot, but also draw the reader into the story.

Make these sidebar guys and gals and monsters interesting. Let them steal the show. Let them trip up and push along your MC.

Let them enrich your world and your story, so your MC can trudge along the plotted path and get done with it already.

Oh, and what does the monkey flipping you the bird have to do with this post? Absolutely nothing. He's simply there to demonstrate my point: He's interesting. My friend took this picture recently.

What are your thoughts? How important are supporting roles in the reader's experience?

supporting roles are extremely important. Otherwise you just have the MC by himself. No relationships, no nothing.
Boring.

Oooh, I agree. Supporting roles make an MC so much more interesting. The conflict, the interactions, or maybe the lack of interactions, they're all very significant :)

I agree that supporting roles are important but I heard from some writers that you need to make sure not to make them too interesting and steal the show. You want them to be just that, a supporting role, not the main role.

I don't know if I agree with that but it's definitely something to keep in mind.

Excellent post, although it broke my heart just a wee bit to have you choose Gollum as an example over Sam, the most beloved and loyal of all sidekicks :)

I think the MC's goal is usually to further the plot, but the supporting characters often end up bringing in the heart and humor of the story - you may laugh but I know for a fact you have a few Buffy The Vampire Slayer fans that will agree with me that the character of Buffy was not the heart of the show - her best friend Willow was. And Willow did an excellent job of bringing us into Buffy's universe with humanity, heart, and humor. (I really didn't plan that alliteration, sometimes they just come out that way.)

What I would add to your post as my own thoughts - often times you get to know the main character better through his or her treatment and relationships to the supporting characters - and so they add a depth and richness to main characters that otherwise might not be there. For example, you can have your main character be a mafia hit man who brutally kills someone in the first scene then lovingly puts his young daughter to bed in the second scene. Both the murder victim and daughter are side characters, but they are showing us some very important information about the main character.

Ok, I'm done rambling. Your posts always get me thinking and talking!

Yep. I totally agree! You've got to have the supporting cast there to express and convey depth. They bring the color to the black and white cavas of a story.

This seems another case for "show" instead of "tell", showing things about characters via their interactions.

Using your examples, good character interaction seems important to
1) make the reader care more about the MC and his/her fate, ergo the story, (as we see sam is essentially a good, kind person we care about him. and as sam's fate is frodo's fate we care more about frodo's fate, the story. frodo's treatment of sam also makes us like frodo more--it shows he's also a good, kind person.)
2) to make an action believable ( frodo's trusting nature towards gollum was justified by his previous interactions with people in the story), and
3) to give a story extra emotional elements which may be difficult fit into one character (gandolf evokes wonder in the reader and sam evokes empathy; and if sam were so powerful like gandolf there would be less suspense and frodo's difficulties would have been unbelievable, and if he had sam's characteristics he would have looked too weak for a hero.)

I thought of another fine example of sidekick being more interesting than our MC: Dr. Watson.

How can I forget Dr. Watson! It's the ultimate case of using a sidekick to enhance the MC.

Falen: The MC MUST have interaction. Remember the volleyball in Cast Away?

Mia: Lack of interests? Good point, because someimtes what is not written is the most significant point.

Palindrome: I disagree not on principle, but on data. C3PO and R2D2 stole the show. Jack Sparrow was a sidekick until they realized how interesting he was. The list goes on.

Tracy: I love Sam, too, and I agree about Buffy. Angel was so interesting he got his own show. I love your rambings and random alliterations. That's the poet in you.

Heidi: I'm running into this in my current WiP, which is why I posted on it. My MC is all right, but I need better supporting roles. Like you said, the co-stars paint the character.

CL: You nailed it. I love when a post generates such thoughtful comments.

First and foremost- my supporting characters have a 'function'. They're there to expose another facet of my mc's personality or create friction and a storyline. Eventually many of them take on a personality of their own but that's the magic of writing:)

My supporting characters are in a constant battle for word count. It's a fight for scenes and importance. And then new characters spring up out of nowhere and vie for attention.
I keep trying to tell them that the story is not about them but they won't listen. This is when as an author you need to put your foot down and send them to their rooms until they learn to behave.

I learned a lot from all the great posts today. Using the side characters to demonstrate a side of the MC...very interesting.

Also...Han Solo was by far the most interesting person in Star Wars...duh!

Great post. Got some more tools for my toolbox out of it.

Dang, what took me so long to read this post? It's a great one and very timely for me. I'm about 20% in to my ms and am still introducing characters.

Thanks for the insights! Olivia

Eric, I love the new digs.

Also, this is a great post. Now I'll be analyzing my manuscripts to find my most interesting supporting characters.

Always great to have something to ponder on a Monday morning.

CQ Girl: Supporting roles should have a function, and as you stated, they are there to expose a part of the MC you might not otherwise see.

Andrew: Everyone has an agenda -- even the supporting characters. Most of them don't give a whit about the MC's plotline. Funny that way.

Racquel: Han Solo! Now you're showing your age... ;) The comments here have been invaluable, no doubt about it. It's exciting when you can glean so much information from fellow writers.

Olivia: Glad this post gave you some information. I write this stuff for me -- based on what I am currently fighting with -- and it helps me work through my own story issues. I am fighting right now with a character who is too isolated. I need to inject sidekicks or supporting roles... thus this post was borne.

Cat: Glad you found something to ponderize. Hopefully I can get to your blog today and see what good stuff you have waiting in the woods.

Excellent observation. The MC's gotta follow the rules more/stay within the boundaries, so frequently they can't be as fun as the side characters (which are usually more fun to write, too).